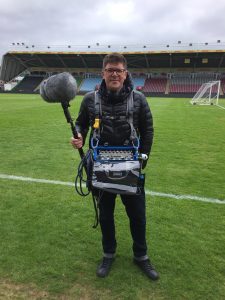 Hello, I’m Jono Cary and I am a London based freelance sound recordist and production sound mixer with many years of experience in the industry. I’ve got a highly personable and organised attitude and I possess a broad range of specialist skills in the TV production / Film, commercial, corporate, broadcasting, event, and audio-visual spheres. I’m a sound recordist from London, UK with a vast array of experience and knowledge ready to get the sound right on your production.

I have extensive experience in all types of production sound; TV, commercial, corporate, documentary, film, 360, VR, Binaural and branded content. Based in London, United Kingdom and happy to travel worldwide! Working in every environment and able to get broadcast sound whatever the conditions!

I have many, many hours of on-set experience working with every type of client. Someone you can trust to work harmoniously with any crew, whatever the shoot. Holds clean UK car and motorbike licences. UK passport holder, DBS / CRB checked, friendly, professional, hard-working and a can-do attitude. Getting the job done to the highest quality is the name of the game.

Some days are studio days

No filter need for this beautiful sunset on the be

Getting some lovely AMBEO recordings for an upcomi

Great fun on this one, thanks to all involved.

Nice bit of 16mm for a fashion shoot. The old digi

#bbc #televisioncentre where it all began, where m

Q5X Aqua mic today. Scene in a pool. Got 4 of them

Such a privilege to hold a gold Olympic medal. . .

Keeping the audio sweet while on a job for the #In

#dreamteam real fun show I did with the lads offof

Someone caught me looking whistful and unshaven at

Found this in #coventgarden . @christopherlawson f

Nice to be interviewing in an acousticly treated t

Hilarious couple of weeks spent with these two lad

Straight back to the grindstone after holidays, ye

Interviews today with the man himself #farboyslim

Very happy to be interviewing the one and only #fa

@benmarlow larking around at the Westfield waiting

@johnny_vaughan66 it was a pleasure to work with y

Sometimes a bank holiday is all about playing clas

Nice to be on the Christmas tree today. Missed you

Someone caught me Micing up 🙂 #jesselingard #Sou

When you live in Greenwich and are off to #bve #Em

Today learning all about some iconic British boots

Another end of the year job with #footballs #RuddG

Whether it’s a small ‘Portable Single Camera’ (PSC) Doc or corporate job, a large scale multi-camera reality TV job, A full scale commercial or Drama or something more specialist like a music recording, VR / 360 sound capture or extreme conditions recording, kit choices for sound department are important! Below is a list of the core kit that I have as a sound recordist, additional items can be sub-hired for specialist jobs. A few major considerations when hiring sound kit is having sound back-ups, timecode sync and IEM (In Ear Monitors) / wireless headsets.

Sound Back-up / Camera Link
Having sound backed up (recording in more than one place) it is always recommended, this is achieved by having it recorded in the sound bag and on the camera and this can be done using a stereo wireless hop (see below) which is dedicated transmitter in the sound bag going to a dedicated 2 channel receiver mounted and powered from a V-Lock plate on camera. A cheaper option for getting audio onto camera for playback and first edits (but not for final mix) is a mono ‘scratch’ hop.

Timecode Sync
Timecode is a seriously time saving tool for post-production workflow. Having the camera’s TC and sound recorders TC synced means that in post the audio files and video files drop seamlessly together and sync is done for you. TC sync is achieved by using TC lockit boxes that are synced with the sound bag (the master) on TOD (Time Of Day) timecode and then feed the camera with the exact same timecode accurate to within a 1/4 of a single frame over 24 hours. The boxes are very small and self powered and will save much more time in post than they cost to hire per day on set! In addition, both as a backup and to aid cameras without TC sync a ‘timecode clapper board’ or ‘smart slate’ can be hired (see below) which gives a visual readout of the timecode and the age-old traditional ‘sticks’ snapping for the audio/visual sync point.

IEM / Wireless / Client Headsets
IEM or In Ear Monitor receivers are essentially wireless receivers with headphones that can be hired (see below) for listening into the sound mix on set. Several different mixes can be sent out e.g. Just lav mics, or just boom or overall mix. Giving Director, client, producer, script supervisors or anyone else a listen into the audio being captured on set.